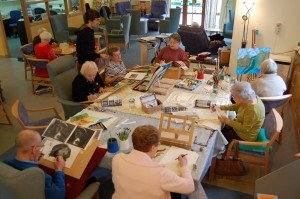 The Roxburghe House Artroom project began in 2007 with a pilot project in the day unit. As it developed we began to run sessions for families, visitors, and at patient bedsides and, in 2012, started to offer creative writing alongside visual art – supporting patients to explore and record their lives in words. Over time Artroom has become an established part of the service at Roxburghe. Patient art works now adorn the walls, creating a welcoming environment for all. We now also work with outpatients, as well as offering experiential training for clinical staff.

Support from Roxburghe House clinical staff has allowed the project to root itself and flourish. We are also grateful to the Friends of Roxburghe House, who believed in and funded the project from the start and who continue, with NHS Grampian Endowments, to co-fund it.