Ena Baxter: Say it with Flowers

Predominantly known for being the creative force behind 30 years of soups, jams, pickles and sauces that have established Baxters Food Group as an international brand, Ena Baxter is also a graduate for Gray’s School of Art where she studied drawing and painting.

After graduating, Ena worked for the Ministry of Food at Torry Research Station before becoming an art teacher and taking the post of Head Teacher of Art at Milne’s High School in Fochabers, where she met and went on to marry Gordon Baxter. After many years of hard work and with the business well established by the mid 1970’s, Ena returned to painting. Having grown up in Huntly, Ena has always been passionately keen on gardening and the growing of flowers and plants. Drawing inspiration from this and influenced by the work of Cecil Kennedy, one of the country’s sought after floral painters, Ena’s painting style radically changed.

Cecil, who Ena and Gordon both became close friends with, spent a great deal of time in the studio showing Ena how to paint flowers in his personal style. He was a perfectionist, creating perfectly executed paintings of everything from insects to antique containers, tables and water drops. For Ena it was a long and intensely demanding struggle before success came her way.

‘Ena Baxter – say it with flowers’ exhibtition will be shown in the Dress Circle Bar at His Majesty’s Theatre from 26th November 2014 to 28th February 2015. 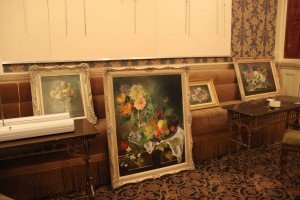 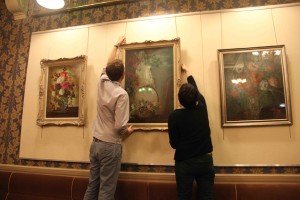