The latest GHAT exhibition in His Majesty’s Theatre’s Dress Circle Bar, which opened on Monday, August 31 for 13 weeks, is ‘Curious Creations’ by local artist Doug Prosser.

The work in Curious Creations was developed, during a period of insomnia, from pen and ink drawings created in bed between two and five o’clock in the morning. Doug then turned these original drawing into a series of vibrant digital prints.

‘Initially a painter of traditional landscapes, I moved onto what I, somewhat pretentiously, regarded as a crossover between abstraction and realism. The separations in the image were designed to emphasise that first and, hopefully, enhance the second. This exhibition has however moved, perhaps, more into the realms of surrealism’ 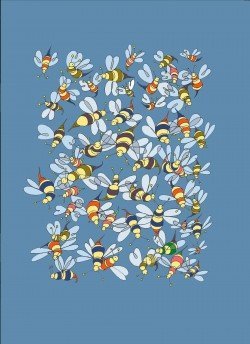 Doug left Gray’s School of Art of Art in the late 1960’s, and over the next 30 years taught in various academies in the North East of Scotland. He left the teaching profession to concentrate on developing his own practice, which has lead to several successful one man and joint exhibitions. Doug’s work is now represented in many private collections throughout the world.